Oh, the Weather Outside is Frightful - it's DRY!!

We wish we had better news about December weather. Those smart weather forecasting folks at NOAA are predicting warm and dry conditions again this month.

My water bill is creeping up there because our trees and plants aren't going to water themselves. At least we'll get some vitamin D while outside setting up the hoses and sprinkler heads.

Even though your neighbors probably aren't watering their landscape, set a good example by your actions and then try encouraging them to do the same. Let your neighbors know that dry plants roots over the winter can lead to plant stress or death or something in between.

Think ... wet - winter, or wet roots going into the winter season is the best way to care for your plants.

I like to water mid-day so it soaks in well. Move the sprinkler around the drip line of trees every fifteen minutes or so. Also focus on newly planted landscapes or just the newest plants.

Why Should you Water Your Trees this Winter
Posted by Betty Cahill at Sunday, December 05, 2021 No comments: 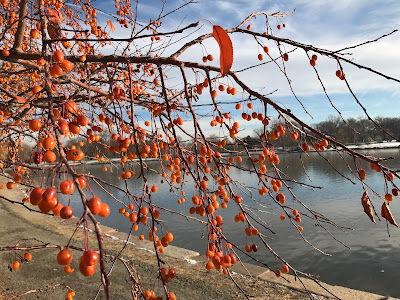 Most likely, with the exception of small children, Thanksgiving day holds many memories.

If you focus you can almost put yourself in that time and place of past Thanksgiving Day holidays.

Time travel aside, you might agree with a critic who once said ... "parts of it I liked, parts of it I didn't."

The not so pleasant Thanksgivings for me centered around table seat location. Either I was seated at the kid's table where crying and fussing was the group consensus or positioned where two side dishes were parked near my plate - the giant tomato aspic gelatinous thing and a dressing casserole swimming with sick-looking grey particles of oysters mixed around with other unknown stuff.

The aspic looked like a left over Halloween attempt to scare small children, no doubt it was named goblin goop or zombie jello. The oyster dish had an aroma that just didn't mesh well with savory turkey and creamy pumpkin pie. I know, I know, for some folks Thanksgiving just ain't the same without these two sides.

My grandparents on my dad's side hosted Thanksgiving Day for most of my young childhood. My siblings would say that I was a reluctant guest (putting it mildly). Hey, the grandparents didn't have a wide selection of toys and in those days we had to play in the "other" room and keep our voices down. Those square nesting blocks got pretty old pretty fast.

Later in my teens when my parents started hosting, both sides of the family would often be invited. Those years were my favorite. My mom prepared the Thanksgiving basics with contributions from the relatives who specialized in the two dishes mentioned above. Some years a guest would bring rolls, other years my mom would make them. You could always count on everyone at the table slathering the rolls with butter then topped with her homemade strawberry jelly that was made from that year's current crop. Bonus, you'd take home a jar or two to enjoy over the winter.

Dickie (my mom's nickname, read here to find out why) was as holiday prepared as the Food Network programming schedule ten weeks out from Christmas. I think she started shopping for Thanksgiving provisions right after Halloween.

Two days before Thanksgiving she'd bake the pumpkin pies, at least two; someone else usually brought a pecan pie or two. She was the queen of pie crusts, with every complement she'd say the secret is using a little cold water which guarantees a flaky crust.

Also a couple of days ahead, she'd tear bread slices into small pieces right into the large mixing bowl so it would be good and dried out for the dressing. The day before preparation included boiling the turkey giblets for the dressing and setting the table. Everything else was cooked, baked, mashed, sliced and ready before the 2:00 pm sit down Thanksgiving gathering. 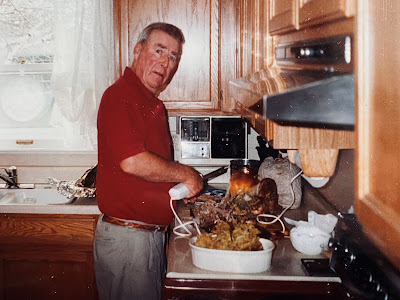 Stocky's (my dad's nickname) role in all of this preparation included keeping the grandkids entertained, mashing the potatoes and carving the turkey with the handy electric knife. I come from a family who uses this precise tool for many meat dishes. I still have the electric knife given to me as a Christmas gift the first year after college graduation.

It will be used this
Thanksgiving.

Just prior to sitting down, the football game was muted (if allowed to be on), then we stood, holding hands around the table to thank the Lord for our family and friends and the bounty we were about to receive. Polite passing of food, complements to gramma (my mother) and conversation ensued while everyone lovingly cleaned their plate and voiced that they didn't think they had room for pie, not.

After the family heirloom dishes were cleared and washed, a rousing card game of "31." was on anyone's mind who didn't want to get back to the football game. Players had to ante up a nickle or dime and hope that you drew high cards to be the first to knock, then after one more round of draw and discard, the person closest to 31 or who had 31 total card points took the ante. Games were short and quick and allowed for talking, laughing and memory making.

My Dad or Uncle Hank always seemed to win. No matter, those years taught me the fun of card and board games, especially at family gatherings.

As my favorite aunts, uncle's and parents passed away over the years, Thanksgiving Day dinners became less of an event and more about plugging in with those of us left. We'd talk about the old days, savor the remaining wine or coffee and relax watching the next generation hurry and eat so they could play with their toys.

In recent years Glen and I often host Thanksgiving here in Denver with the Cahill family. We rarely travel to my sibling's homes out of state. We keep the meal fairly basic with turkey, gravy, dressing, mashed potatoes, cranberries (real, not canned), green beans and of course pumpkin pie. Sweet potatoes, as much as I love them aren't generally served, but I wouldn't turn you away, plus insist you join us if you showed up on our doorstep with a hot dish of sweet potatoes with melted marshmallows on top! 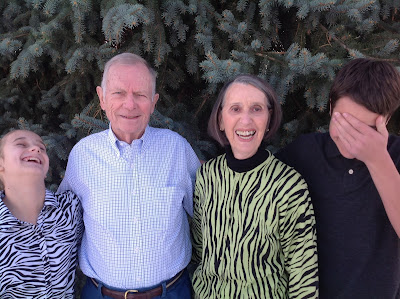 This year's Thanksgiving will be bittersweet since we just lost Glen Sr. (my father-in-law) at the age of 90. He passed away just a few days ago. The photo left was taken a few years ago at our house. Rachel and Max our niece and nephew, plus Glen Sr. and Louise ... a moment of laughter made it a fun photo and wonderful memory!

May this year's Thanksgiving Day be very special with your family (past and present) and dear friends.

Posted by Betty Cahill at Tuesday, November 23, 2021 No comments:

We live in central Denver with deciduous trees growing on every front yard hell strip and then some. Love the shade, love the green canopy, I even love the leaves for mulching new plantings and tucking in and over the vegetable beds.

What I don't like is the constant mess of leaves that blow and go right where I raked the hour before. Usually these leaves are from the neighbor's trees who haven't raked yet (or ever).

It's getting near the end of the leaves falling for the season and in celebration, here's a Top Ten Classic David Letterman.

9.    Keeps asking where he should plug in his rake.

8.    Picks up leaves one at a time, dips them in nacho cheese, eats them.

6.    Your neighbor calls and asks, "Who's that naked guy chasing my dog with a rake?"

5.    Half an hour after he starts, you notice he's sitting on your back porch.

4.    You recognize his work gloves from the O.J. Simpson trial.

3.    Comes to your back door and says "I've had a long talk with the leaves, and they've decided to stay."

2.    Constantly reminding you that he used to be famous for those "Home Alone" movies.

Posted by Betty Cahill at Thursday, November 18, 2021 No comments: 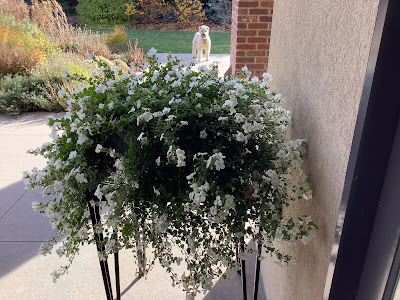 What's still in bloom in the garden?

We have a lovely annual container of white bacopa on the patio. Granted, it is in a protected location next to a stucco wall, but it's going strong. Ferris is looking on with approval.

A large clump of perennial blue scabiosa is intermittently blooming among the surrounding brown and tan foliage. Both plants are being visited by slow moving, determined honeybees. 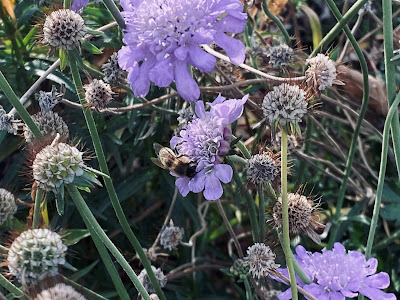 A lone violet achillea bloom appears proud and determined to remind us of a summer that has come and gone. 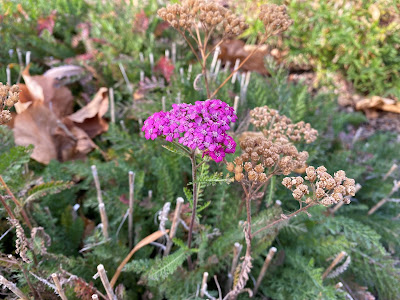 Cut and grow again leafy lettuce mix in a Smart Pot® keeps us provided with a fresh tasting and welcome side salad two to three times a week. 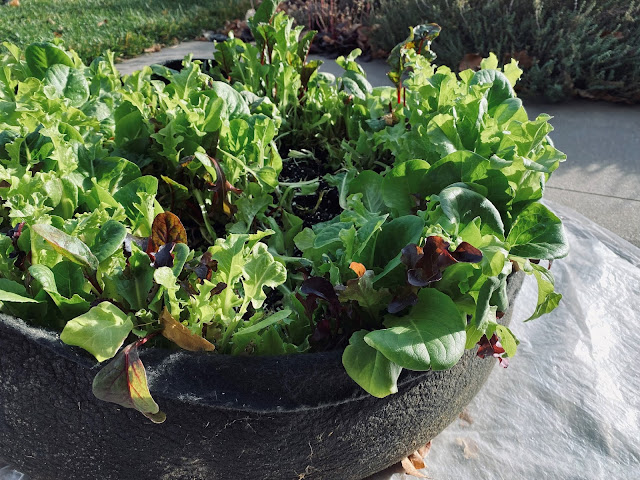 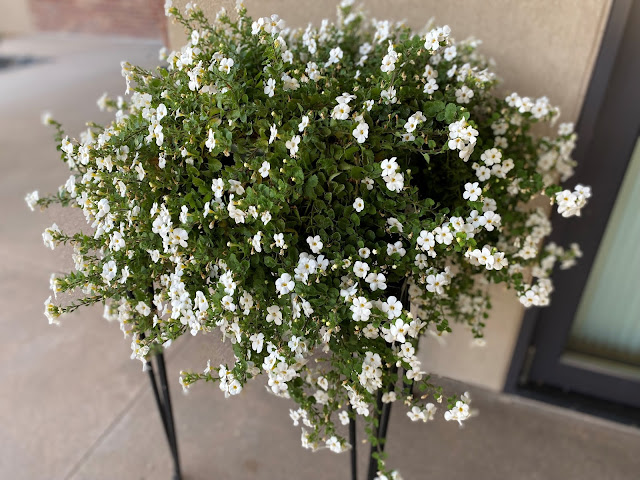 Posted by Betty Cahill at Tuesday, November 16, 2021 No comments:

As we've experienced each summer, pest Japanese beetles die out in the fall but aren't forgotten. We know the females have laid scores of eggs in lawns, which in a short time become larvae (white grubs) that feed on turf roots until the ground gets cold sometime in late fall. They remain tucked into the soil below turf roots until next spring to early summer. After pupating in spring these new progeny will emerge from lawns as adult Japanese beetles only to frustrate gardeners for another summer.

For a visual of the Japanese beetle one year life cycle, see the illustration below.

While they are fresh in your mind, why not take some time now and contribute to a much needed plant survey about Japanese beetle feeding preferences in our region. Up to now, no major organized list exists for those of us who are looking for a quick plant reference guide. Many thanks go to John Murgel, Extension Agent Horticulture and Natural Resources in Douglas County for putting the reporting survey together with other supported input from area gardeners and professionals.

Below is the link to the survey, it's one plant per survey. This might take you a little time when thinking about all your landscape plants that Japanese beetles like and ones they don't bother.

No worries if you don't have the exact cultivar or botanical name of the plant, such as blue spruce, just enter blue spruce. If you know it has a botanical and cultivar name - Picea pungens 'Baby Blue Eyes," then please include this on the form. BTW, Japanese beetles do not favor blue spruce or conifers in general.

Many thanks, please pass this information on to other gardeners who may wish to help in the survey.

Posted by Betty Cahill at Wednesday, October 13, 2021 No comments: